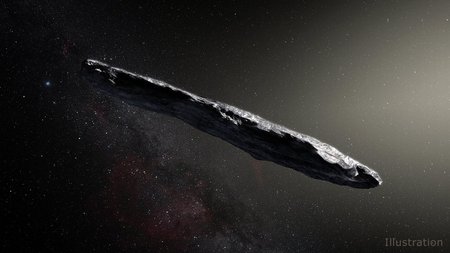 An artist's concept of interstellar asteroid 1I/2017 U1 ('Oumuamua) as it passed through the solar system after its discovery in October 2017. Observations of 'Oumuamua indicate that it must be very elongated because of its dramatic variations in brightness as it tumbled through space. Credit: European Southern Observatory / M. Kornmesser
Tags:
astronomy & physics

In November 2017, scientists pointed NASA's Spitzer Space Telescope toward the object known as 'Oumuamua—the first known interstellar object to visit our solar system. The infrared-sensing Spitzer was one of many telescopes pointed at 'Oumuamua in the weeks after its discovery that October.

'Oumuamua was too faint for Spitzer to detect when it looked more than two months after the object's closest approach to Earth in early September. However, the "non-detection" puts a new limit on how large the strange object can be. The results are reported in a new study published today in The Astronomical Journal and coauthored by scientists at several universities, including the Jet Propulsion Laboratory, which is managed by Caltech for NASA, and IPAC, a data and science center for astronomy at Caltech.

The new size limit is consistent with the findings of a research paper published earlier this year, which suggested that outgassing was responsible for the slight changes in 'Oumuamua's speed and direction as it was tracked last year: The authors of that paper conclude the expelled gas acted like a small thruster gently pushing the object.

"'Oumuamua has been full of surprises from day one, so we were eager to see what Spitzer might show," said David Trilling, lead author on the new study and a professor of astronomy at Northern Arizona University. "The fact that 'Oumuamua was too small for Spitzer to detect is actually a very valuable result."