A Magnificent Burst from Within Our Galaxy 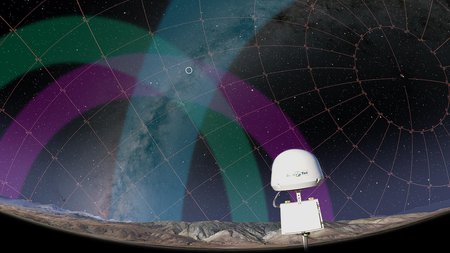 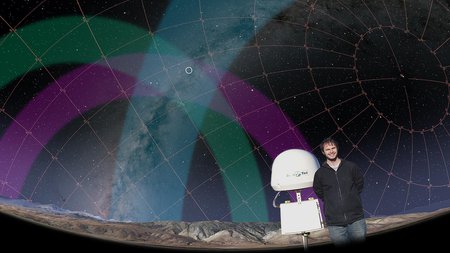 Chris Bochenek is seen here next to a STARE2 receiver in this photo composite. The background shows a fish-eye view of the night sky as seen from Caltech's Owens Valley Radio Observatory, where one of three STARE2 receivers is located. The three colored bands illustrate how data from each of the three receivers were used to roughly triangulate the powerful radio burst seen on April 28, 2020. For each pair of receivers, small timing differences in the arrival of the signal were used to map out bands of localization; where the bands overlap is the approximate region where the signal originated. Observations with several other telescopes helped to ultimately pinpoint the location of the fast radio burst to a magnetar, whose location is marked with a white circle. Credit: Caltech/R. Hurt (IPAC) 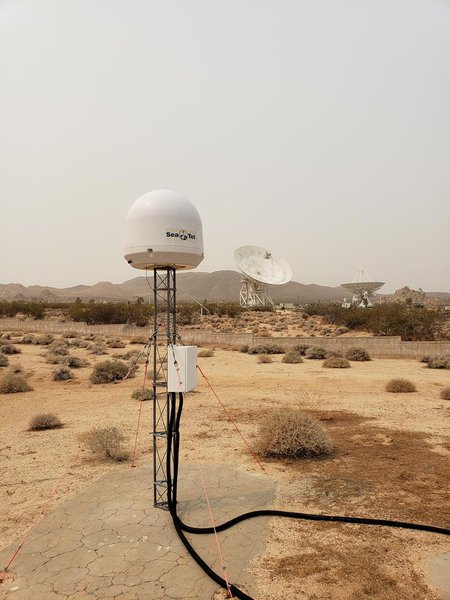 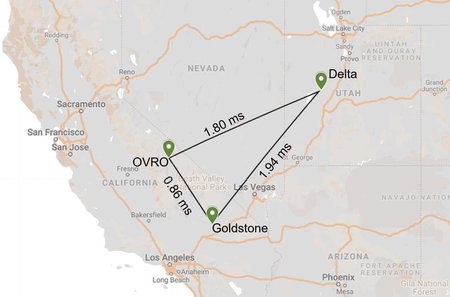 Map of the STARE2 radio receivers, located at Caltech's Owens Valley Radio Observatory; the Goldstone Deep Space Communications Complex; and near the town of Delta, Utah. The times shown on the map represent the light-travel time between stations. Credit: Caltech/C. Bochenek 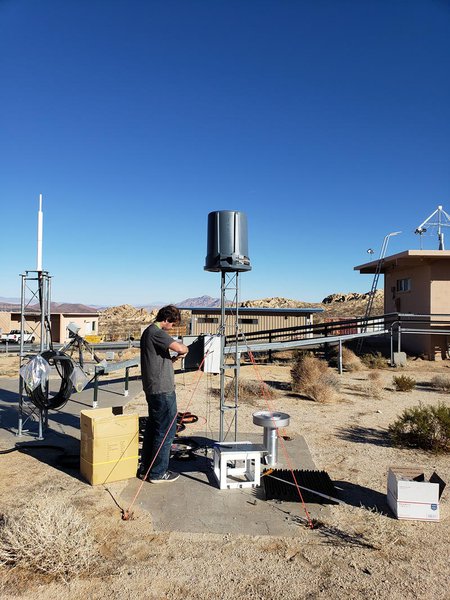 A suite of radio antennas, including those making up Caltech's STARE2 (Survey for Transient Astronomical Radio Emission 2) project, together with other ground- and space-based observatories, have captured overwhelming evidence to help unlock the mysterious cause of cosmic blasts known as fast radio bursts, or FRBs. These ultrafast radio flashes, first discovered in 2007, are known to originate from distant galaxies, but until now, no one could say with certainty what was causing them. In a series of studies published in the journal Nature, researchers demonstrate that the answer to the decade-long riddle likely involves a type of dead magnetic star called a magnetar.

Magnetars are spinning stellar remnants, left over from the explosion of massive stars. What makes magnetars stand out from other dead stars is their extreme magnetic fields: the magnetic field of a magnetar is more than 100 trillion times stronger than Earth's own magnetic field. Magnetars were previously identified as possible sources of FRBs, but evidence for this theory was limited.

With these latest findings, astronomers have finally caught a magnetar red-handed, as it shot out an intense radio blast in our own cosmic backyard. The FRB was first detected on April 28, 2020, by the Canadian Hydrogen Intensity Mapping Experiment, or CHIME, located in southwestern Canada. Though CHIME caught the blast in its peripheral vision, outside where the telescope is most sensitive, it was clear that the signal was coming from our own Milky Way galaxy (before now, all observed FRBs had originated from outside our galaxy). The CHIME team put out a notice about the detection to the astronomy community, which prompted the Caltech STARE2 team to expedite their routine inspection of candidate events detected earlier in the day.

"When I saw the data, I was basically paralyzed," says Christopher Bochenek (MS '18), lead author of a new Nature study on the STARE2 results, and a Caltech graduate student working with Vikram Ravi, assistant professor of astronomy at Caltech. "At the radio frequencies we observe with STARE2, the signal was much stronger than what CHIME reported. We had caught the FRB head-on." In fact, this event amounts to the most energetic radio blast ever recorded from our galaxy, shooting out as much energy as the sun produces in about 30 seconds, assuming the magnetar's estimated distance of about 30,000 light-years.

STARE2, a Caltech-led project with funding from NASA's Jet Propulsion Laboratory (JPL) and Caltech, consists of three radio receivers, each about the size of a large bucket. They are located at Caltech's Owens Valley Radio Observatory; the Goldstone Deep Space Communications Complex operated by JPL; and near the town of Delta, Utah. STARE2 is not nearly as sensitive as CHIME but has a wider field of view that covers basically the whole visible sky, and it observes at radio frequencies that are twice as high as those seen by CHIME.

"I was very surprised when Chris told us the news," says Ravi. "Until this blast, STARE2 had been operating for nearly 450 days without detecting anything besides the sun. This was a long-shot project, but Chris worked tirelessly to put it together, and traveled to all the sites to set up the antennas. This is a huge reward for a graduate student. Caltech is a great place for ambitious students like Chris to shape their own projects."

In addition to radio waves, other telescopes in space detected electromagnetic radiation coming from the same area of the sky, specifically from a magnetar called SGR 1935+2154 (SGR 1935 for short). NASA's Swift and Fermi observatories, for example, which observe X-rays and gamma rays, respectively, picked up rumblings from the magnetar on April 27, the day before the massive radio blast. Other telescopes observed X-ray bursts simultaneously with the radio burst. These include the European Space Agency's INTEGRAL (The INTErnational Gamma-Ray Astrophysics Laboratory); the China National Space Administration's Huiyan X-ray satellite; the Russian Konus instrument on NASA's Wind mission; and the Italian Space Agency's AGILE (Astro‐Rivelatore Gamma a Immagini Leggero) mission. Additional telescopes also observed activity from the magnetar before and after the radio burst, helping to further characterize the event. Together, all of the observatories ultimately helped pinpoint the FRB caught by CHIME and STARE2 to a magnetar.

The STARE2 project was initiated by Shri Kulkarni, the George Ellery Hale Professor of Astronomy and Planetary Science at Caltech, and it was Bochenek who got the project up and running. With the help of co-author Konstantin Belov of JPL and Dan McKenna, an instrument engineer at Caltech, he helped find the three sites for the antennas and set them up. He even tested a shield for the instrument that is designed to block unwanted radio waves with improvised techniques, such as the use of his Prius; like other cars, a Prius emits radio waves. In addition, the team used cake pans to help adjust the sensitivity of the instrument. "What we have done is a little strange for modern radio astronomy," says Bochenek.

Unlike CHIME and other radio telescopes that have big dishes, the STARE2 antennas can see the whole sky all at once. What they lose in sensitivity, they gain in field of view. "STARE2 works more like a car antenna than the radio dishes that are typically used in astronomy," says Bochenek.

The team chose three different locations for the antennas to help establish that any given radio signal was real. Because there is so much background noise in radio bands, detecting a signal at the same time at all three locations helps confirm that the signal has come from space. What is more, small timing differences in when the receivers pick up the signal help to roughly localize the signal on the sky.

"We were all skeptical this would even work," says Ravi. "Although we were very confident in the hardware, which was developed for the Deep Synoptic Array FRB-detection project, we gave STARE2 less than a 10 percent chance of actually detecting a burst. Observations in coming years with STARE2 and its successors will tell us exactly how lucky we were."

Are Magnetars the Answer to the Riddle of FRBs?

The STARE2 data helped establish that the magnetar-induced radio burst coming from our own galaxy is similar to the FRBs observed in remote galaxies. According to Ravi, these data, together with data from CHIME and the other telescopes, provide strong evidence that not just this FRB but many FRBs likely come from magnetars.

In addition to showing what causes FRBs, the new observations from STARE2 and others suggest how the bursts occur. According to the scientists, the collection of data across the electromagnetic spectrum supports the idea that flares on the surface of a magnetar, similar to those that erupt from the surface of the sun, generate the blasts.

"It's surreal. I never thought STARE2 would work this well," says Bochenek. "We feel fortunate to have seen an event this magnificent in the lifetime of this project."