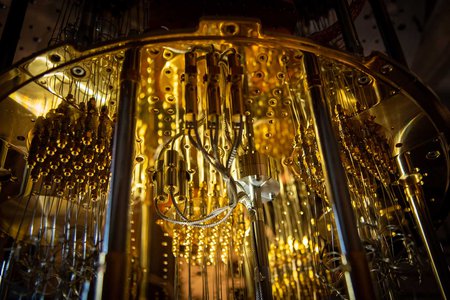 The five new centers will develop cutting-edge quantum technologies for use in a wide range of possible applications including scientific computing; fundamental physics and chemistry research; and the design of solar cells and of new materials and pharmaceuticals. To establish the centers, the Department of Energy is awarding $625 million over five years.

"The intersection of information science, materials engineering, and quantum technology is an enormous area of opportunity, and one in which we are investing heavily as an institute," says Caltech president Thomas F. Rosenbaum, the Sonja and William Davidow Presidential Chair and professor of physics. "Caltech researchers, with their comfort moving between disciplines and helping define new fields, are perfect fits for the national DOE effort in quantum materials, quantum computation, and quantum networking."

The Quantum Systems Accelerator will pair advanced quantum prototypes—based on neutral atoms, trapped ions, and superconducting circuits—with algorithms specifically constructed for imperfect hardware to demonstrate optimal applications for each platform in scientific computing, materials science, and fundamental physics; the Quantum Science Center will focus on the advancement of topological quantum materials as well as of algorithms and sensors that will enable the manipulation, transfer, and storage of quantum information; and Q-NEXT will focus on communication networks for quantum systems, and on the development of sensors and of quantum simulators and computers to test those systems. The Co-design Center for Quantum Advantage will design materials, devices, and software. The center's goals are to control material properties to extend coherence time, design devices to generate more robust qubits, optimize algorithms to target specific scientific applications, and develop error-correction solutions.

The Quantum Systems Accelerator, Preskill says, has assembled a group of the top scientists and engineers in the field, including experimental and theoretical physicists, computer scientists, electrical engineers, and theoretical chemists, to develop quantum processors that "will explore the mysterious properties of complex quantum systems in ways never before possible, opening unprecedented opportunities for scientific discovery while also posing new challenges. One of the questions we want to address is: what are the future applications for these devices? We have an idea of what those applications could be, but the possibilities keep shifting as the technology advances and our understanding improves," he says.

"Many years ago," says Alicea, who will participate in the Quantum Science Center, "Alexei Kitaev [Caltech's Ronald and Maxine Linde Professor of Theoretical Physics and Mathematics] devised an ingenious idea for exploiting novel phases of matter to build inherently error-resistant quantum computers. One of the center's aims is to bring that idea to experimental life. We will develop new road maps toward that end goal and hopefully discover lots of interesting physics along the way."

Painter, a member of the Q-NEXT center team says, "Q-NEXT brings together scientists and engineers to develop the materials and devices for constructing large-scale networks in which information can be distributed using quantum entanglement, a special property of nature usually only observed at the atomic scale. These networks, representing a form of quantum internet, would embody a manifestation of quantum mechanics at a truly massive scale, with the potential of realizing new methods of securely sharing information, performing distributed computations, or deploying arrays of sensors."

Faraon says that his role in the Co-design Center for Quantum Advantage will be "to investigate new materials and techniques for connecting superconducting qubits to optical photons." The new center will foster an interesting exchange of ideas, he says: "By bringing so many different experts together, we can come up with new ideas for next-generation quantum technologies."

More information can be found in news releases from the Quantum Systems Accelerator, the Quantum Science Center, Q-NEXT, and the Co-design Center for Quantum Advantage.

Additional information is in a DOE news release.